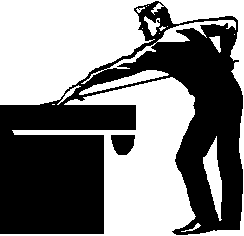 The Tasmanian Snooker Championship, played at the Ulverstone RSL Club this weekend, with the finals on August 25/26, again promises to be a weekend of first class snooker. Defending Champion Les Higgins leads the very strong southern contingent, including Gregg Watts, Luke Webb, Brendan Milburn and Steve Carroll and Jeremy Cowie.

If Northwest Champion, Cale Barrett was to win he would become the youngest ever winner, at sixteen years and four months old, the other North West players are Callam Bissett, Gerrad Wicks, Bob Boucher and Geoff Lehman.

Play gets underway at 10 am on Saturday with non stop snooker on three tables at the Ulverston RSL Club, through until 3.30 on Sunday afternoon

Works Green have replaced Works Red as the ladder leader in A Reserve competition, Green had a 6 all draw with RSL White, G Perry and Zane Brown won for Green, Lee Morcom and Dennis Collins were RSL’s winners.

Works Navy, had an 8-4 win over Exeter Green, at Exeter, Navy’s Warren Hayes and Philip Page were the only winners on the night.

Leading Players, Alan Armitage continues to lead the player stats winning 19 frames from 26 played, followed by Hans Geogieff 18 from 27 and Dean Wilson 18 from 27, Keith Coomber 19 from 29, Harley Stebbings 15 from 23, David Sheppard 12 from 19,

David Bates 5 frames to 3 in the final at the Works Club on Saturday afternoon. Pickett has now won 15 Northern Snooker Championships together with 14 Northern Billiards Championships. Pickett beat Gary Bjarnoe-Elliott is the semi-final and Terry Adams in his Qarter final. Bates, the current Northern Billiards Champion, beat Peter Donati in his semi-final and John Fraser in the Quarters. Earlier Bjarnoe Elliott beat Rolf Stevenson and Donati beat Robin McEnnulty in their quarter final matches.

Les Higgins won the Southern Tasmanian Championship, beating Gregg Watt 5-3 in the Southern final, over the weekend. Higgins made an outstanding 129 break.

Sixteen players have now qualified for the first round of the Tasmanian Snooker Championship, to be held at the Burnie Club over the weekend of August 11/12. The final will be held on the weekend 25-26th. August at the same Club.

Works Raiders, with another 4-0 win, this time over The Flaming Devils, are now 6 points clear of Works Blue on the “A” grade ladder, Keith Coomber, Barry Glover, Harley Stebbings and Alan Armitage all won for the Raiders.